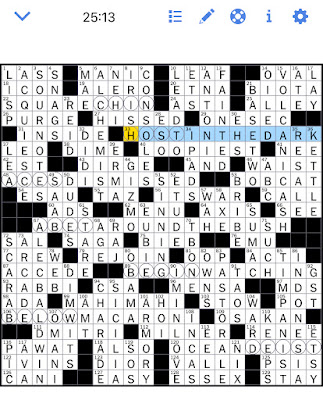 My time: 25:13, a couple of minutes under average. This one was a toughie!

Theme: several phrases are recast by having the letters of one word rearranged into ABC order (47 Down: "kind of order for the circled letters in this puzzle").  So for example shot in the dark becomes HOST IN THE DARK ("emcee during a power outage?").  That's the best of the clues by far.  And ocean tides becomes OCEAN DEIST ("one who believes exclusively in a sea god?").  As you can see from that second example, there are some diminishing returns on the cleverness of these answers.

"What you might do after the movie previews are finally over?" is BEGIN WATCHING.  That's kind of meh but not infuriating.  What is infuriating is "facial feature of a Lego man?"  SQUARE CHIN.  First, it's Lego figure, not Lego man.  Second, Lego figures don't have square chins.  Their heads are cylinders.  They don't even have chins.  This is beyond misleading and there is no payoff.  I think it's fair to say without hyperbole that I am utterly outraged.

Never heard of the Bocca Nuova crater.  It's atop MT. ETNA.

"Regulus is its brightest star."  LEO.  It has so many stars!

"What the abscissa and ordinate are measured from."  AXIS.  Have I heard those terms before?  Maybe twenty-odd years ago in high school.  I was told there would be no math.

Our old pal SAL is in this puzzle, but it's not the famed mule of song for once but instead some stupid skit on "Jimmy Kimmel Live."

"Bird in Liberty Mutual commercials" is EMU, the LiMu Emu!  Ha ha!  The bird is wearing a shirt!

We're all familiar with MAHI-MAHI and its various named, like dorado (from "golden" in Spanish), but didn't know that the Hawaiian name means "very strong."

Never heard of Martin MILNER, actor known for "Route 66."  He was also in "Adam-12" and Sweet Smell of Success, one of my favorites.

I've watched Grease and I know the character of Frenchie, but I couldn't have told you that she's played by DIDI Conn.

As I've mentioned, I'm not a big musical fan.  Apparently there's a character named Winthrop Paroo in "The Music Man," and he has a LISP.  Okay, then.  And he plays a cornet, maybe?

There were quite a few red herrings in this puzzle.  For "most eccentric" I naturally put *LOONIEST but it's LOOPIEST.  "Miss" is LASS.  And so on.

Familiar faces: Oldsmobile ALERO.  It's a mainstay.  And OSAKAN as a member of Japan's "second city" came up on January 2, 2018.  Another quite common mainstay: opera singer RENEE Fleming.  Ragtime player EUBIE Blake came up on one of the worst Thursdays ever.

Thing I thought would be a clever clue: "common thing to lie about."  I thought maybe *BED but it's just AGE.

This was slow going for me, as the theme took a long time to sink in and as mentioned there was some pretty tricky cluing.  Not a puzzle for DIMWITS.
at July 26, 2020