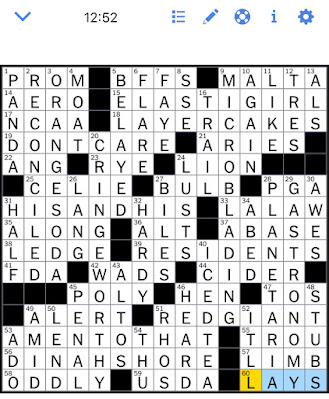 My time: 12:52, decent enough.
The puzzle clues MALTA as "country whose name is believed to come from ancient Greek for honey-sweet," but this is uncertain; Etymology Online has a different view.
I'm so far removed from sports, I didn't know the NCAA was headquartered in Indianapolis.
Whiskey, sure, but I don't think I've heard of RYE beer.
"Columbia athlete" is LION.  Their mascot is a blue lion named "Roar-ee!"
HIS AND HIS for "like some monogrammed towels" got me.  Good for you, New York Times!  Very progressive.
Did you know Tokyo's Imperial Palace has a MOAT?  Now you do.  You're welcome.
I know who DINAH SHORE is, but I had no idea she was in the World Golf Hall of Fame.  Apparently she began golfing at the age of 52, and was no pro.  But she brought a famous name to a tournament and helped bring golf onto television. Shore had such a lasting effect on the LPGA Tour that in 1994 she was posthumously made the only honorary member of its prestigious Hall of Fame.
Alice FAYE is an actress who was most active in the 1940s.  In 1939, Faye was named one of the top 10 box office draws in Hollywood.  She was known as "Queen of Fox Studios."  Her movie song sold over a million copies.  How quickly the world moves on.
Never heard of MICROBLADING, an "eyebrow-filling technique."  It involves making small cuts in the very top layer of skin, like a tattoo but not permanent.
Hilton ALS is a critic at The New Yorker.  He's a fine writer, but maybe not famous enough to be a crossword clue?
Los ALTOS is a city in California.  Over the years, the New York Times puzzle has featured every city in California, I think.
The symbol for density is rho, which looks like a small rounded P.  RHOS indicate matter divided by volume.
Clever clues: "Ball in a gym, maybe" is PROM.  I was thinking about medicine balls; they got me good.  "Org. for good drivers" is PGA!  I of course fell for it and put *AAA at first.  "Overlook" is a noun and is LEDGE.  "Stage for a big star?" is RED GIANT; well played.  LIMB being clued as "life partner" is a neat trick.  The last word of "Meteor showers" has a long o, as in showing the meteors: it's the pompous plural PLANETARIA.  "Act like a shark, in a way" is LEND.
Great puzzle!  Fun and challenging cluing, with some nice long answers.
at July 31, 2020