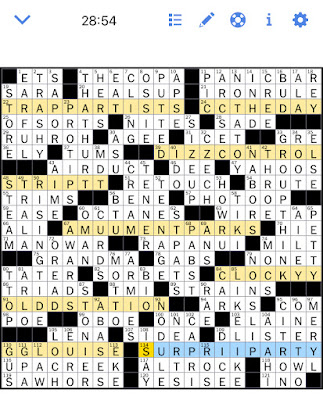 Theme: "Doubles Play."  Each themed answer is written as if you say a plural letter name inside it.  So trapeze artists is written TRAPP ARTISTS (tra-P's artist).  "Geez Louise" is written GG LOUISE ("G's Lousie).  "Amusement parks" is written AMUUMENT PARKS (am-U's-ment parks).  And so on.

THE COPA is The Copacabana, the real-life New York nightclub famed in song and used as a setting in many, many movies.

I thought Astro might say "RUH-ROH," but I didn't want to commit to it, because that's what Scooby Doo says!  How derivative.  If there's an original thought out there, I sure could use it right now.

Cathedral city ELY has come up before.

For "bug" I could not stop thinking of synonyms for "annoy."  It's WIRETAP.  The cross there didn't help.  I thought "pang" was for sure *THROB but it's THROE (?).  And "special orders on new autos," one I got ?RIMS made me try to imagine a sort of class of rims, like *Z-RIMS or something.  It's the far more quotidian TRIMS.  Sometimes I try too hard to out-think the wordplay.

Still, there was just way too much that I felt was obscure and abstruse in this grid, and it nearly sunk me.  Language spoken on Easter Island?  RAPA NUI is not exactly in most people's knowledge base.  One of its crosses baffled me for a while: "it's found in a key: abbr." is ANS.

Jazz vibraphonist MILT "Bags" Jackson isn't exactly a household name, either.  And while I've heard of crossing answer Alvin AILEY, I don't think "Revelations choreographer" is likely to ring a lot of bells.  From the website: "More than just a popular dance work, it has become a cultural treasure, beloved by generations of fans."  Has it, though?  Has it?!

You know who else isn't a household name?  "Author/magazine editor" ELAINE Welteroth!  In April 2016, Welteroth was named editor-in-chief of Teen Vogue, making her the second person of African-American heritage in Condé Nast's 107-year history to hold such a title.  Teen Vogue?  Look, I don't want to be an old fogey, bu this won't do.

Children's author ROS Asquith has come up before, and I never heard of her then, either.

"First man, in Maori mythology" is way too abstruse for even a Sunday.  It's TIKI.  He found the first woman, Marikoriko, in a pond; she seduced him and he became the father of Hine-kau-ataata.  That clears things up!

For "taste" I confidently put in *SAVOR.  It's SAPOR.

I liked the tricky theme a lot, but some of these grid was a real chore to put in even once the penny dropped.  YES, I SEE the complexity of it.  But I NO like.  NERTS!
at July 19, 2020